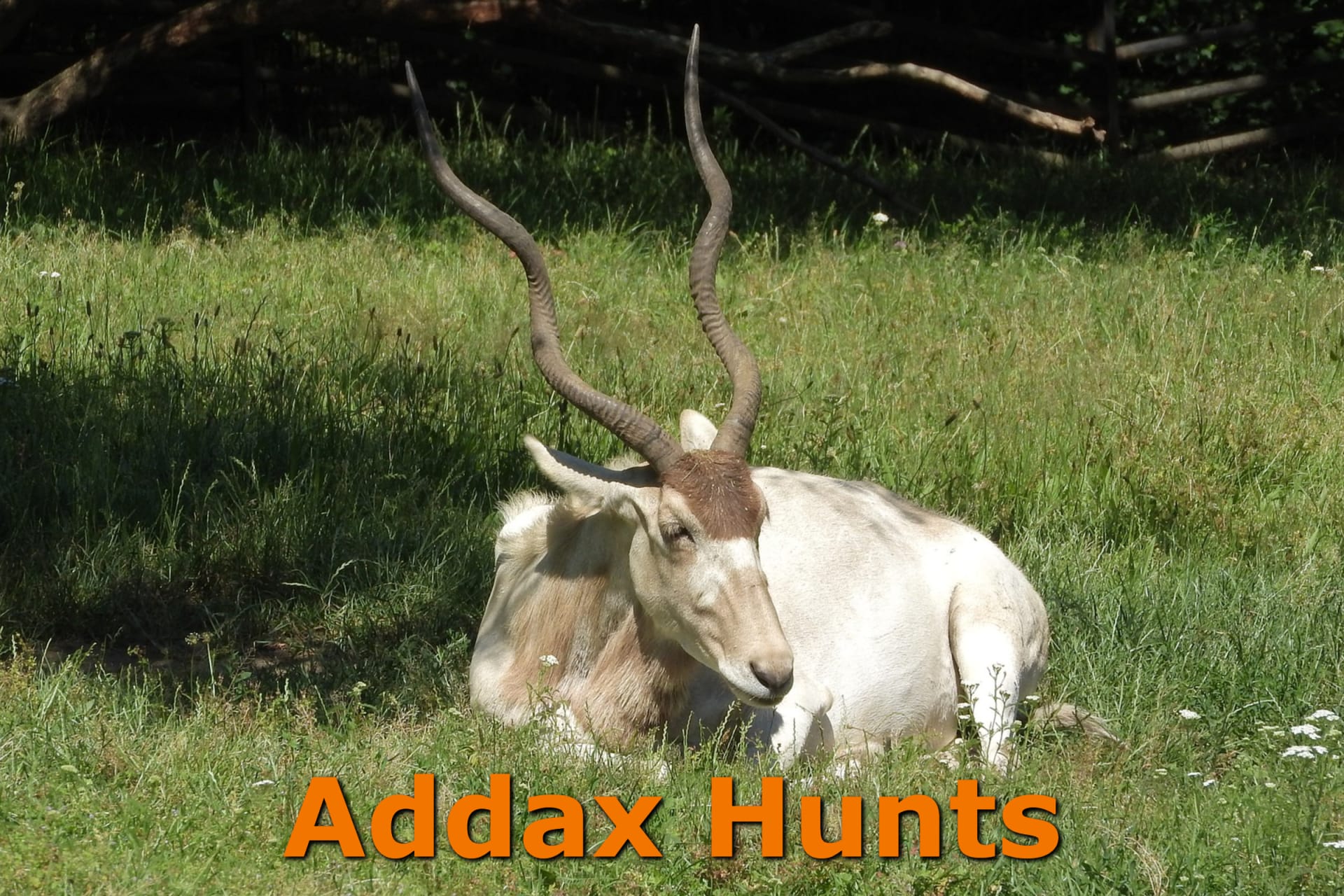 Have you ever wanted to participate in Addax hunts? You can at Squaw Mountain Ranch! We offer Addax hunts for anyone who is interested in this beautiful animal. The Addax is prized by many trophy hunters because of its rarity and distinct features. An Addax makes a great trophy due to its interesting and stunning characteristics. An Addax is the way to go if you want to set your trophy room apart from any other trophy rooms. Before participating in an Addax hunt, learning about the animal will help you hunt it down on our ranch.

What Is an Addax?

You may have never heard of Addax hunts before, but SMR prides itself on the knowledge of the animals we have, and we’re here to help. The Addax, sometimes called the white antelope or screwhorn antelope, is related to the common antelope. Unlike the common antelope, it’s native to the Sahara Desert. Trophy hunters prize the Addax because of two very distinct features.

The first distinct feature of this creature, as its alternate names might suggest, is its pure white fur. Depending on the season, the Addax either has all white fur or fur that has a slight brown tinge. During the winter, the Addax grows a thicker coat that is the darker. In the summer, its coat is almost completely white. The other distinct feature of the Addax is its horns. Addax horns spiral above its head and are very long. Their horns can reach lengths of 33 inches.

Unlike other species of antelope, female Addax have horns almost as long as males. Their horns typically have two to three spirals in them. However, more spirals have been found. Their horns point towards the sky, and they taper towards the ends. An adult male Addax can weigh up to 275 pounds and can be a little over three feet tall. Strangely, their feet actually have scent glands. It’s believed this is the case to help them avoid areas where predators have been.

Learn the Habitat to Maximize Potential During Addax Hunts

When going on Addax hunts, it’s important to be aware of their preferred environment. The Addax lives in the Sahara Desert, so it likes hot environments. Though they like hot environments, they are accustomed to low temperatures because deserts can be very cold during nights, especially in winter. Like many other desert animals, they can live without water for extended periods of time and are well adapted to their unforgiving native habitat. Instead of drinking water, they receive most of their water through the food they eat.

The Addax is an herbivore and usually feeds on anything green it can find in the deserts they live in. They mostly eat grass. However, researchers have examined them eating tender shrubs and small plants. In their natural environment, they are susceptible to attack from lions, African wild dogs, cheetahs, and leopards. The Addax is on the critically endangered list due to unrestricted hunting in their native habitat. However, their population is quite large in captivity. At one time, it had become extinct in Morocco and Tunisia, but has been reintroduced and is doing well with conservation efforts.

The Mating Season and Activity of the Addax

During Addax hunts, our staff often get questions about the mating season and the activity of the Addax. Addaxes are social animals and live in patriarchal herds of roughly 20 animals at a time. Though they live in patriarchal herds, generally the oldest female leads the group as she is often the slowest. This allows a herd of Addax to protect the weakest members of their group and helps them to not fall behind when traveling.

They are mostly active during the daytime, however, if temperatures become hot enough, they will stay awake all night and sleep during the day. Their mating season is year-round, and a female stays pregnant with a calf for up to 264 days. The hunting season for Addax in Texas is year-round as well.

What Makes Squaw Mountain Ranch Have the Best Addax Hunts?

Texas offers some of the same features in the way of temperature and terrain that the Sahara does. If you live in Texas, you know it can get really hot, which is what addaxes like. While addaxes don’t need a lot of water, there’s plenty of shrubbery for them to enjoy on our ranch. Because we care so much about our animals, they grow to be some of the biggest in Texas.

Guided Tour for All Types of Hunts

Alongside Addax hunts, Squaw Mountain Ranch offers Texas whitetail hunts, elk hunts, red stag hunts, and even exotic animal hunts! For whatever hunt you choose to go on, we offer guided tours. We believe every hunter who loves the outdoors should have the ability to hunt for the trophy of their choice. That’s why we offer assistance to our patrons with disabilities. Our guided tours are great for experienced and inexperienced hunters alike. We can help track down the animal you’re after or we can just give you vital information on where to find them.

No matter your hunting style, we’ll accommodate you. From bow and arrow to gun, you can use it all on our ranch. Part of the reason our ranch has brought so many great experiences to hunters from around the country is because we have the knowledge other ranches don’t. We love sharing our knowledge with anyone willing to listen! Whether you want to know about the Addax or Asian water buffalo, we can help you.

If you’re interested in hearing more about our Addax hunts, please give Squaw Mountain Ranch a call at (830) 275-3277!