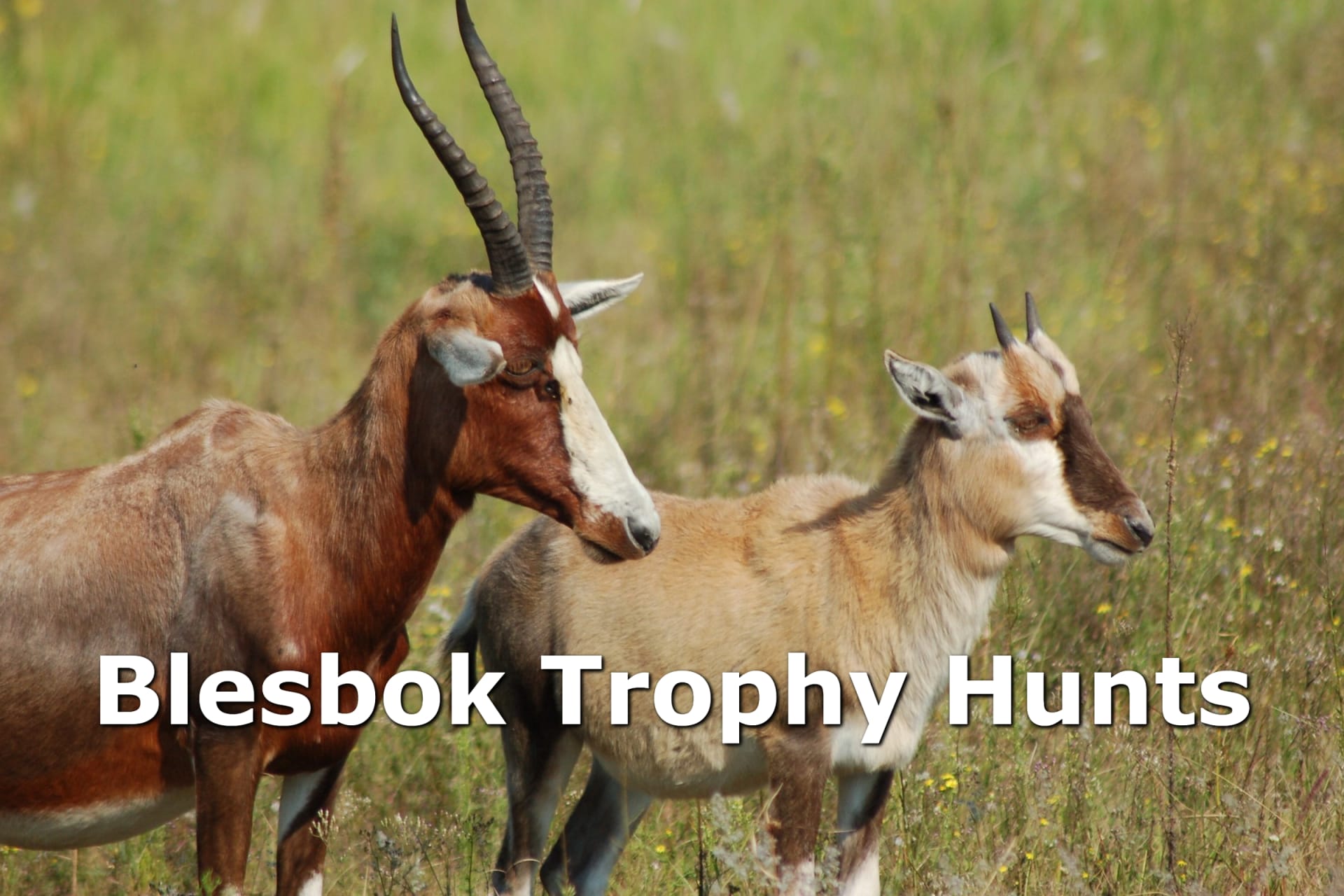 Squaw Mountain Ranch hosts a wide variety of trophy game including whitetails, elk, red stags, and even exotic animals all here in Texas, but many seasoned hunters want to talk to us about our blesbok hunts. Many seasoned hunters prize the blesbok because of their distinctive facial features. One thing many hunter love about the blesbok is their large horns that would look great in any game room. Compared to other ranches, our trophy hunts are affordable, so don’t worry about cost. Also, there’s no need to worry about an unfair hunt. Our animals benefit from the environment that we’ve created to give them an advantage. Learn more about blesbok hunts below!

Blesbok Hunts: What Is a Blesbok?

Blesbok hunts are a great way to test your experience as a hunter. Blesboks are an animal closely related to the antelope and are native to South Africa and Swaziland, making them fast and agile in flat landscapes. Because of their prominent horns and beautiful color patterns, many trophy hunters like to display them in their trophy room. Blesboks have a dark brown to light brown coat with white faces. A full-grown male blesbok can reach a weight of about 190 pounds and a height of 3 and a half feet. On their backs, their coat becomes lighter than their fur on their bodies.

One of the most interesting features of the blesbok is their legs. Blesbok legs are sturdy and allow them to run up to speeds of 43 miles an hour. Many people confuse blesboks with another type of animal known as a bontebok, however, you can tell the difference because blesboks have a white stripe on their face while bonteboks don’t. Compared to males, females are slightly thinner as well as slightly shorter. The easiest way to tell the difference between the two is to look at their horns. Male blesboks have larger horns than females. Male blesbok horns can get to the length of almost a foot and a half. Blesboks can interbreed with bonteboks, and most refer to their offspring as bontebles. However, interbreeding doesn’t occur in the wild as both blesboks and bontebloks live in different environments.

The Habitat of Blesbok

When going on blesbok hunts, it’s important to understand the habitat of a blesbok. Because blesboks are native to South Africa and parts of Swaziland, they love to roam in grasslands. This is great as our ranch offers a vast grassland for blesboks to roam and graze. Blesbok tend to stay away from wooded areas and like to stay in herds of up to 25 animals. People discovered the blesbok in the 17th century. Their discovery by European explorers almost made them extinct by the 19th century.

However, today their numbers are on the rise, with many of them finding refuge in open grassland national parks across in South Africa and ranches like ours. Blesboks enjoy water, which is great because our ranch offers 23 ponds. You’ll be able to spot a blesbok during your trip in no time as they like to migrate from watering hole to watering hole! In their natural habitat, blesbok are prey to lions, leopards, African wild dogs, spotted hyenas, and cheetahs. However, they are able to defend themselves with the use of their horns.

Mating Season and Activity of the Blesbok

Understanding a blesbok’s mating season and activity will help you with your blesbok hunts. Blesbok, like many animals in the same family, are most active in the morning and afternoon. Their diets consist of grass, so you can expect to find them grazing near together in an open field. Compared to other animals that live in herds, blesboks have a strange way of traveling and mating. Most herd animals separate themselves into different herds of male and female, only meeting each other for mating seasons. However, the blesbok doesn’t do this.

Blesboks travel in smaller herds compared to other herd animals, and females and males travel together. Mature male blesboks try to keep the herd safe, taking extra care to protect the females and young males. Their mating season typically begins around March or May. The territory of blesbok is also small when compared to other herd animals. Most blesbok herds stay in an area of 3 to 6 acres, meaning they are easy to track down. Another giveaway of a blesbok’s territory is that they defecate only at its borders. That means if you see blesbok dung, you’ll know they are nearby.

Why Squaw Mountain Ranch Is the Best Location for Blesbok Hunts

Many ranches all over the country like to say that they’re the best location for blesbok hunts, however, our ranch offers what other ranches just can’t. Because our ranch has a variety of natural habitats, blesboks are at home on our ranch. This does one of two things. First, blesboks can act more naturally and offer a better hunt for both our seasoned hunter and beginner hunters. Blesboks are able to roam freely on our ranch, making our hunters feel like they are working for their trophy. Second, blesbok love to eat grass, and they like to eat a lot of it.

Fortunately for them, there’s plenty of grass to go around at our ranch because we don’t let our lands get over grazed by other animals. This means our blesboks are some of the biggest you can find around! We’ll make sure your happy with your trophy, and we’re sure you will be!

Here at Squaw Mountain Ranch, we take pride in offering guided tours for blesbok hunts. No matter a hunter’s skill level, we are here to give you the best experience possible with our guided tours. We also offer accommodations for our disabled clientele so they can experience a guided tour, as well. It’s our mission to offer all the knowledge of trophy hunting we have, and one of the best ways we can do that is on a guided tour. We can to offer tips to make sure you bag what you want when you want, but you’ll also be at the leisure to go your own pace!