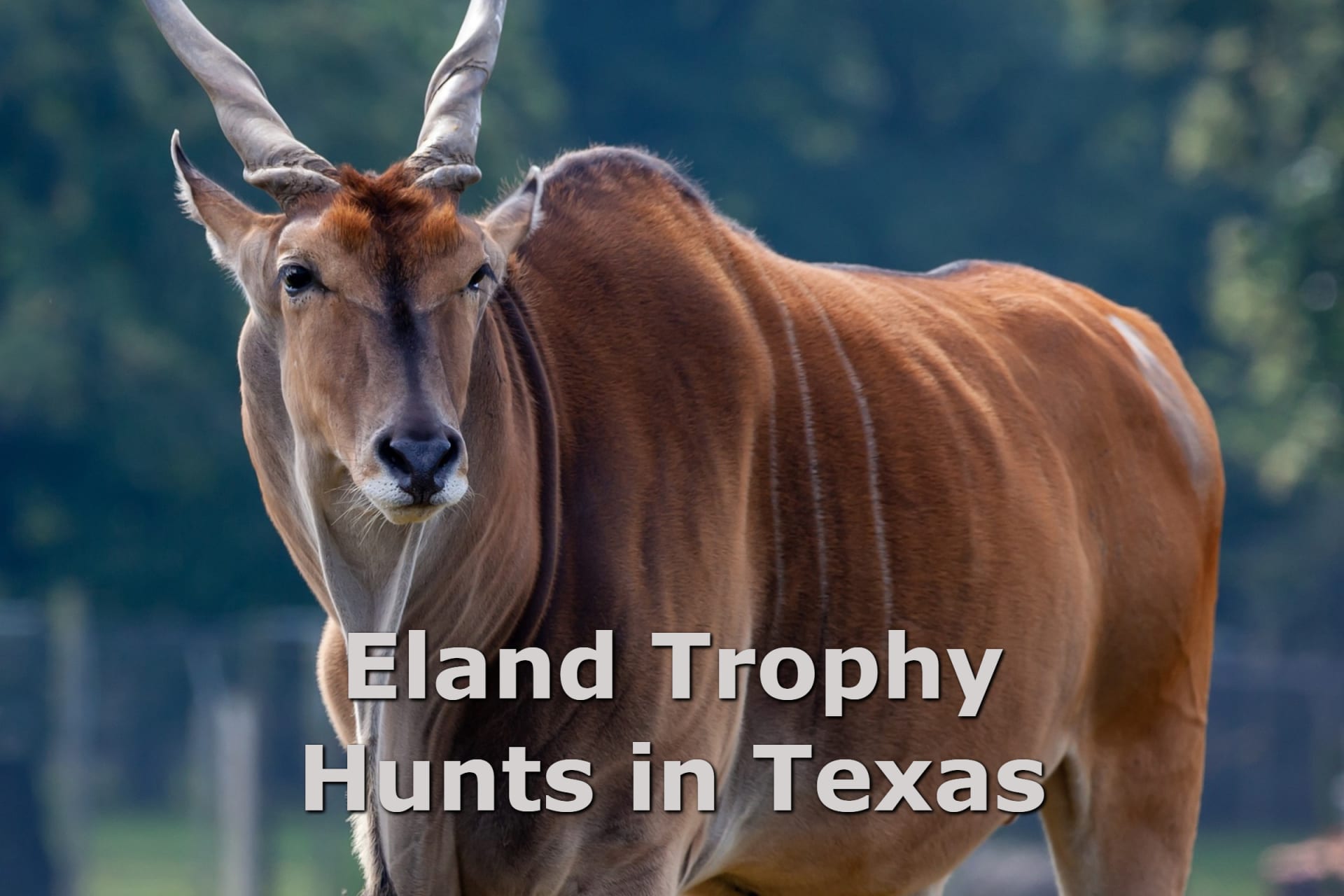 At Squaw Mountain Ranch we pride ourselves on providing a top-quality hunting experience with trophy animals any hunter would be proud to have on display in their trophy room. We offer elk, whitetail deer, red stag and a selection of exotic trophy animals as well. We are happy to be one of the hunting lodges offering Eland trophy hunts in Texas.

The common Eland also referred to as the southern Eland or the Eland antelope, is native to the eastern and southern portions of Africa. These ox-like antelope are highly adaptable and can now be found in many parts of the world, including the United States and Russia. While kept mostly as wild herds, thanks to their large size and suitability to harsh environments these animals are now replacing traditional cattle breeds in commercial milk and meat operations in Africa. Wild herd sizes in Africa have diminished somewhat due to loss of habitat and over-hunting but remain listed as a species of ‘Least Concern’ by animal conservation groups.

Usually, when people think of an antelope they imagine a small-bodied, thin-legged, athletic animal but with their massive size, shoulder hump and the exaggerated dewlap on older males, the Eland more closely resembles an ox instead of an antelope. With males weighing as much as 2,200 pounds and standing as tall as 6.5 feet at the shoulder, the Eland is the second largest breed of antelope in the world. The females are typically smaller than the males, usually standing between 4 to 5 feet at the shoulder and weighing between 600 and 1,300 lbs.

Like most other breeds of antelope, the Eland’s horns are long and sweep back from the head, originating between their ears. The Eland’s horns are long and mostly straight but feature a unique double twist at the base. Both the bulls and cows have horns, and even the calves are born with little buds that grow rapidly in their first 6 to 7 months. The female’s horns are usually black and thinner than the males, measuring anywhere between 20 to 27 inches long. The bulls’ horns are usually a little shorter and thicker but have a tighter spiral. Bulls use their horns to compete for female attention during mating season, as where females use their horns to protect their young from predators. The females will also chase off predators either on their own or will form up in small groups to chase them away.

Females are usually a light tan color, sometimes with a reddish tint. The males tend to be darker and may have a blueish-grey hue that intensifies as they get older. Depending on which region these antelope come from they may also have white stripes over the shoulder and back, a black dorsal stripe, or black markings on their belly and legs. Some may have a short mane that is coarse in texture while the rest of their coat is short and smooth. Because they do not grow a winter coat, you will not need to wait for cooler weather to plan your Eland hunt in Texas to get a trophy quality hide.

Being native to the southern regions of Africa, the Eland has evolved to be a very hardy animal. They can survive in arid, semi-desert habitats and have even evolved to be particularly good at conserving water. The Eland is able to raise their internal temperature by as much as 13ᣞF during the hottest part of the day, reducing their need to sweat, then lowering their body temperature as the ambient temperatures cool. Despite being most accustomed to dry and harsh conditions, they are equally happy in lush wetlands as well as mountainous and lightly wooded regions.

The Eland is what is referred to as a browser and a grazer. This means that while they eat primarily grasses they will strip bushes and trees, even using their horns to break branches off of trees to eat leaves they otherwise could not have reached when vegetation is scarce. Because they are used to living in rather arid climates, they graze mostly in the morning and evening when moisture from the air collects on the plants and grasses they eat. Their herds are nomadic and will travel great distances to wherever the vegetation is greenest.

Like most other cattle, males and females travel in separate herds that join up during the mating season. In the United States Eland mate year-round, so you won’t have to plan your Eland hunt in Texas for a certain time of year to catch some truly impressive standoffs between bulls. They gestate for 8 to 9 months and give birth to only one calf at a time. Females reach sexual maturity around 3 years old with males reaching maturity at closer to 5 years. Males will use their horns to fight other males for breeding rights and will cover more than one female per season. They are not especially paternal animals but they will stay close to the cow they are breeding for a few days.

Because there is no hunting season for these ox-like antelope, you can plan your Eland hunts in Texas for whatever time of year best fits your schedule and preferences.

Despite their large size, Eland can be difficult to track if you do not know what to look, or rather, listen for. It is unclear how they produce this sound, but Eland make a clicking noise as they walk or run. Some think it is a sound made by tendons in their legs. Others believe that due to their immense size, the two halves of their hooves are forced apart when they bear weight and snap back together as they raise their foot. Either way, the sound is distinctive and can alert a skilled hunter that an Eland is approaching from as much as a mile away.

When going on an Eland hunt in Texas it can be helpful to note that these grazers are most active in the morning and evening, taking shelter in lightly wooded areas during the hottest part of the day. In the cooler months, they keep to the same grazing schedule but can be found lounging in open areas or taking in a few rays on hilltops.

As their large size might indicate, the Eland is not a particularly fast animal, their top speed is only about 25 miles per hour. However, they have incredible stamina and can maintain this pace for quite some time. A one-shot kill is preferable with any animal but is especially important as a wounded Eland can put a lot of distance between you where you tagged him, making it difficult to track them down. They are also surprisingly good jumpers, jumping as far as 10 ft from a standing start and easily clearing 8 ft fences with a running start so they can get away from you quicker than you might think.

Call Squaw Mountain Ranch today at (830) 275-3277 to speak with one of our expert hunting guides to plan your Eland hunts in Texas.