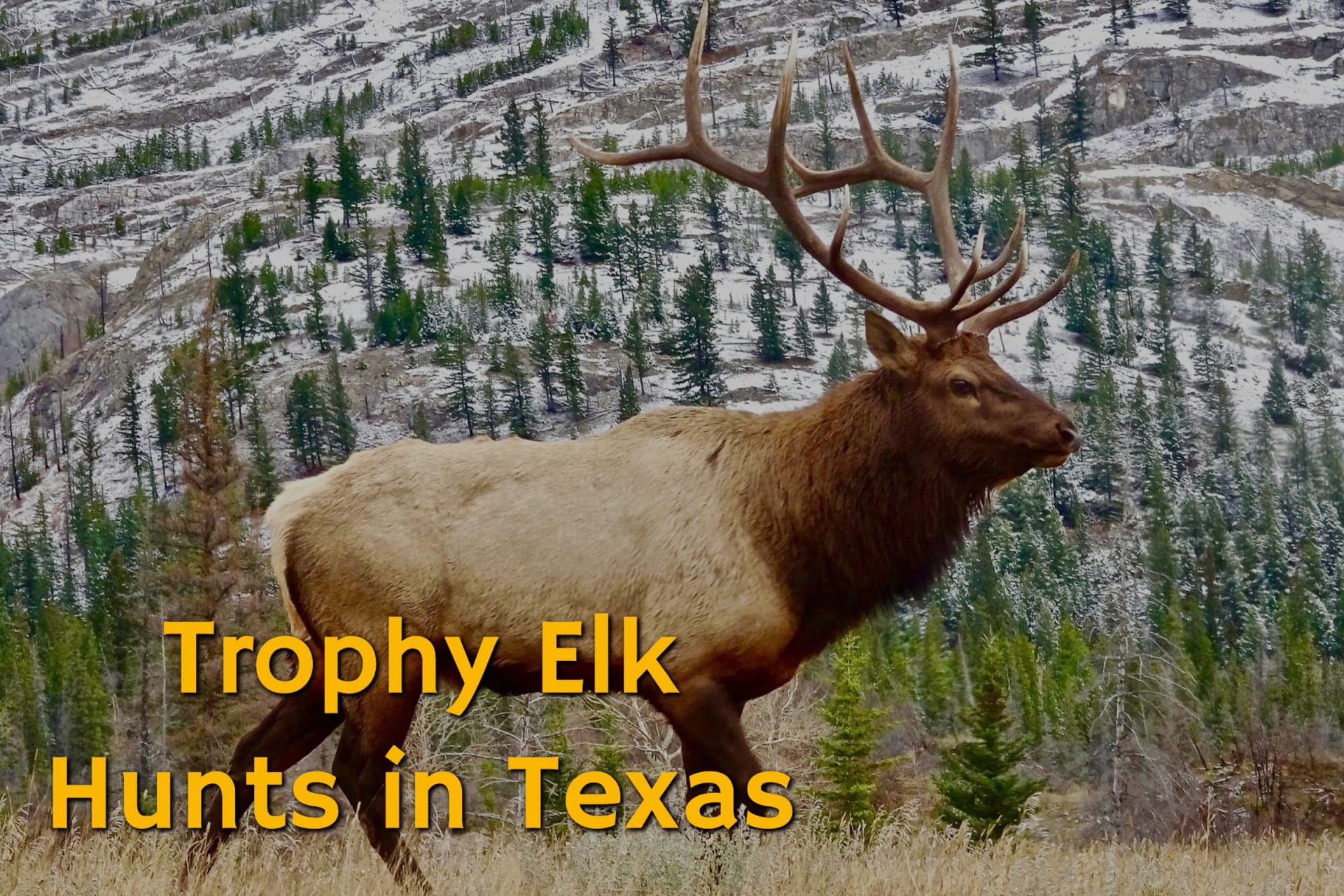 Almost every hunter in possession of a fine trophy collection has a beautiful elk mounted on their wall. If you’re missing your trophy elk, or if you want a bigger trophy, then Texas offers a great supply. Some of the best trophy elk hunts in Texas take place at Squaw Mountain Ranch. At Squaw Mountain Ranch we offer the opportunity to hunt a number of trophy animals including Whitetail Deer, Red Stag, and a variety of exotic animals as well. We are proud to be one of the hunting lodges offering prime trophy Elk hunts in Texas.

While they can be found in Argentina, Australia, and New Zealand, the Elk is native to North America and Eastern Asia. Like the American Bison, Elk once roamed most of the continental US and parts of Canada. Experts estimate that their population was around 10 million strong before westward expansion began. As the west was settled, the Elk were driven into the Rocky Mountains and the northwestern portions of the country.

Like the Bison, their meat and hides were an important resource for the indigenous peoples. Their meat helped sustain various Indian tribes through the winter while their hides were used for clothing, winter cloaks, and were even used to insulate their tipis and huts. Elk eye teeth, or “ivories” were carved and used for decorations or in making jewelry.

Today it is estimated that there are around 1 million Elk in the wild with a population that is steady and strong. Despite herd sizes being only 10% of what they were prior to European settlement, they are listed as an animal of ‘least concern’ on the endangered animal list.

Elk are among the largest land animals in North America. They’re also one of the largest species of deer in the world. Elk are not to be confused for the much larger European Moose, which are referred to as ‘Elk’ in British English. However, they are called ‘wapiti’ by the Cree and Shawnee tribes of North America. The word means ‘white rump’ and the North American Elk were so named for the characteristic buff-colored patch around their short tail.

An Elk’s body is robust with a thick neck. It’s usually a coppery brown color in summer but may turn light tan or greyish in color during the winter months. Their neck, legs, and belly are usually darker than the rest of their coat. Their coat is longest on their belly and around their head and neck. Elk grow a thick winter coat that sheds in the spring. Hunters hoping to bag an excellent hide should plan their Elk hunt in Texas for the colder months when our Elk’s coats will be at their thickest.

Males, called bulls, usually stand around 5 ft at the shoulder and weigh between 400 and 900 lbs depending on subspecies. They have large racks of antlers that are shed and regrow each year. New antlers are covered in ‘velvet’ in spring. By late summer they will shed their velvet and the antlers harden into bone that will be used in establishing dominance during the rut. The antlers of a mature bull can weigh as much as 40 lbs.

Females, called cows, are generally smaller than the bulls but are similar in color. They are usually around 4 ft tall at the shoulder and can weigh between 300 and 600 lbs. Their calves are born a coppery brown with spots and stripes to help camouflage them, however, by autumn their coat will be replaced with a thick winter coat and their spots will fade.

Elk are adaptable animals and can survive in most environments so long as they have access to plenty of water and forage. They are well suited to life in the rainforests of the Pacific Northwest, the alpine meadows of the rocky mountains, and desert valleys of the midwest. Here at Squaw Mountian Ranch, we have 23 ponds and sprawling oak canyons that make our Elk herds feel right at home. With our careful vegetation management program, you can be certain of a rewarding hunting experience if you book your next Elk hunt in Texas with Squaw Mountain Ranch.

Elk eat primarily grasses and flowering plants during the spring and summer. During the autumn and winter, they will begin eating shrubs, tree bark, and even twigs when grasses are scarce.

Elk are fairly vocal animals but they are never more chatty than during the mating season. Bulls will bugle to signal their fitness to breed. They will also use their calls to keep cows close by, warn of danger, or to scare off competition. If a rival male refuses to back down, the males may lock horns in a quick and intensely violent duel. These duels usually do not end until one of them dies or retreats.

The rut begins in late summer and continues into November. Cows will give birth in the spring, usually sometime between May and June. Cows typically only give birth to one calf at a time but occasionally do produce twins. A cow’s estrus lasts between 24 and 48 hours with pregnancy lasting around 8 to 9 months.

As with most other types of deer and cattle, the males either form bachelor herds or travel alone while the females gather in small nursery herds. During ‘the rut’ or mating season, these herds join up for a time while the males battle for breeding rights. Bulls between the ages of 5 and 11 years old will form a harem of as many females as they can gather. Females do not have much loyalty to their bull and will flee the harem if a more fit male presents himself.

Because there is no closed season on Elk, you can plan your Elk hunt in Texas for whatever time of year best fits into your schedule.

Tips for Elk Hunts in Texas

Elk are surprisingly good at hiding. They will bed down in dense thickets and ‘blowdowns’ that you might think are too dense for a bull with a full rack to navigate. Don’t be afraid to check out some of the more densely wooded oak canyons on our property when trying to track down your trophy bull. Maneuvering through these thickets can be a noisy business that may spook your Elk. One way we recommend covering up those sounds is to use a cow call. Bull Elk primarily only call during the rut and are largely silent the rest of the year. Using a cow call will set the other Elk in the area at ease as you move through the woods. This will allow you to get closer to the herd before setting up for a shot.

At Squaw Mountain Ranch we can accommodate a wide variety of hunters of all experience levels. We’ll also work to tailor the hunt to your weapon and method of takedown preferences. Our expert hunting guides will help make your Elk hunt in Texas a success. They’ll lead you to the best trophies our herds have to offer.

Call Squaw Mountain Ranch today at (830) 275-3277. Speak with one of our expert hunting guides to plan your next Elk hunts in Texas.