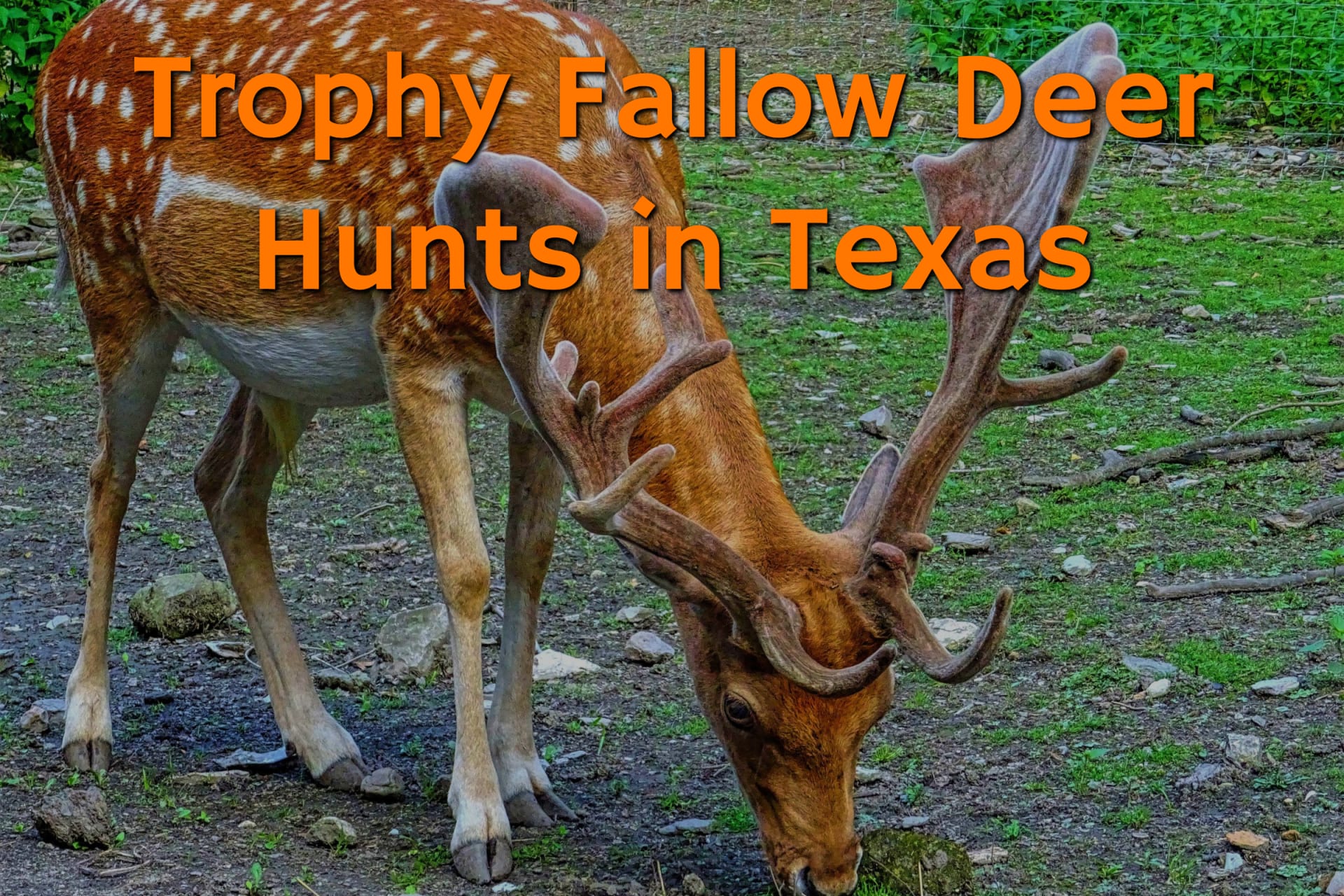 At Squaw Mountain Ranch we offer the opportunity to hunt a number of trophy animals including Whitetail deer, Red Stag, Elk, and a variety of exotic animals as well. We are proud to be one of the hunting lodges offering prime trophy fallow deer hunts in Texas.

Fallow deer are native to Southwest Asia but as early as 9,000 years ago they were introduced to much of the Mediterranean. They were transported throughout the region by the Romans and Normans, allowing these deer to spread throughout Europe. The British brought the fallow deer with them to Australia and New Zealand. Today, feral and managed herds can be found throughout the world, including parts of the United States and Canada. The oldest known fallow deer herd is managed at Phoenix Park in Ireland and consists of 400 – 450 deer descended from the herd originally brought to the island country in the 1660s.

The fallow deer was introduced to the United States in 1918 when the Hillman Land Company purchased a small herd and released them into the wild in Kentucky and Tennessee. Since then, the fallow deer has become a popular trophy hunt, especially in Texas.

Male fallow deer are the only members of this species that have antlers. Bucks begin growing antlers at a young age. However, they are long, straight, and more horn-like in appearance until the age of 3. At that point, they broaden out and become more shovel-like, similar in appearance to the antlers seen on the Alaskan moose.

Of these varieties, the Common and Menil coats are most common with the white and black coats being slightly more common in certain regions of the world. Fallow deer grow a thick winter coat and become lighter or darker depending on the season. Take this into consideration when planning your fallow deer hunts in Texas.

The fallow deer are grazing animals and so typically live in regions with lush grasslands. The bucks also rely heavily on thickets during the rut to attract females so they tend to live near woodlands as well. Our mix of Oak canyons and sweeping grasslands provide plenty of places for our fallow deer to hide and graze.

As with most deer, fallow deer are grazing animals; the majority of their diet consists of grasses. They will also eat the broad leaves of young trees and herbaceous undergrowth. Fallow deer will also eat acorns, chestnuts, beechnuts, and fruit in the fall when they are available. This makes our oak canyons a favorite hang out for our fallow deer herds.

Fallow deer move in small herds, usually no more than 50 individuals. Herds consist of females and their young. Bucks travel by themselves or in even smaller bachelor herds of only 5 – 10 males. During the rut, which usually begins sometime in October, the bachelor and nursery herds will congregate for displays of male fitness to mate. Males become territorial and set up in a ‘rutting stand’ which they defend from encroachment by other males. The bucks call to females using grunts and groans. The does visit bucks in their rutting stands to mate.

Does will remain pregnant for around 8 months and give birth sometime between June and July. Fallow deer usually produce only one calf at a time but twins are common. Does usually reach sexual maturity and begin mating in their second year. Bucks are sexually mature at around 14 months but usually are not successful in mating until closer to their 6th year.

There is no closed season on fallow deer hunts in Texas. However, as fallow deer lose their antlers in spring and regrow them before the rut, we recommend that you plan your fallow deer hunt in Texas for some time between September and February. During this time of the year, the buck’s horns are hard and stripped of their velvet, making for a more impressive shoulder mount.

Fallow deer are shy and suspicious animals. They are quick to run if they sense danger, so hunters will need to be alert and stealthy. Fallow deer can sprint up to 30 miles per hour, can jump close to 6 ft high and over distances of nearly 17 ft, so while their endurance may not be great, they can easily put a lot of distance between themselves and any perceived threat. Something that often works to the hunter’s advantage is the fallow deer’s mating habits. Instead of males gathering a harem that travels with them, the males post up in a rutting stand, drawing females to them.

If hunting during the rut, keep an ear out for the buck’s calls and watch for does congregating near thickets of trees. These deer also stay in the treeline during the heat of the day, usually only venturing out into open grassland in the morning and evening to graze.

At Squaw Mountain Ranch we can accommodate a wide variety of hunters of all experience levels and will work to tailor the hunt to your weapon and method of takedown preferences. Our expert hunting guides will help make your fallow deer hunt in Texas a success, leading you to the best trophies our herds have to offer.

Call Squaw Mountain Ranch today at (830) 275-3277 to speak with one of our expert hunting guides to plan your next fallow deer hunt in Texas.