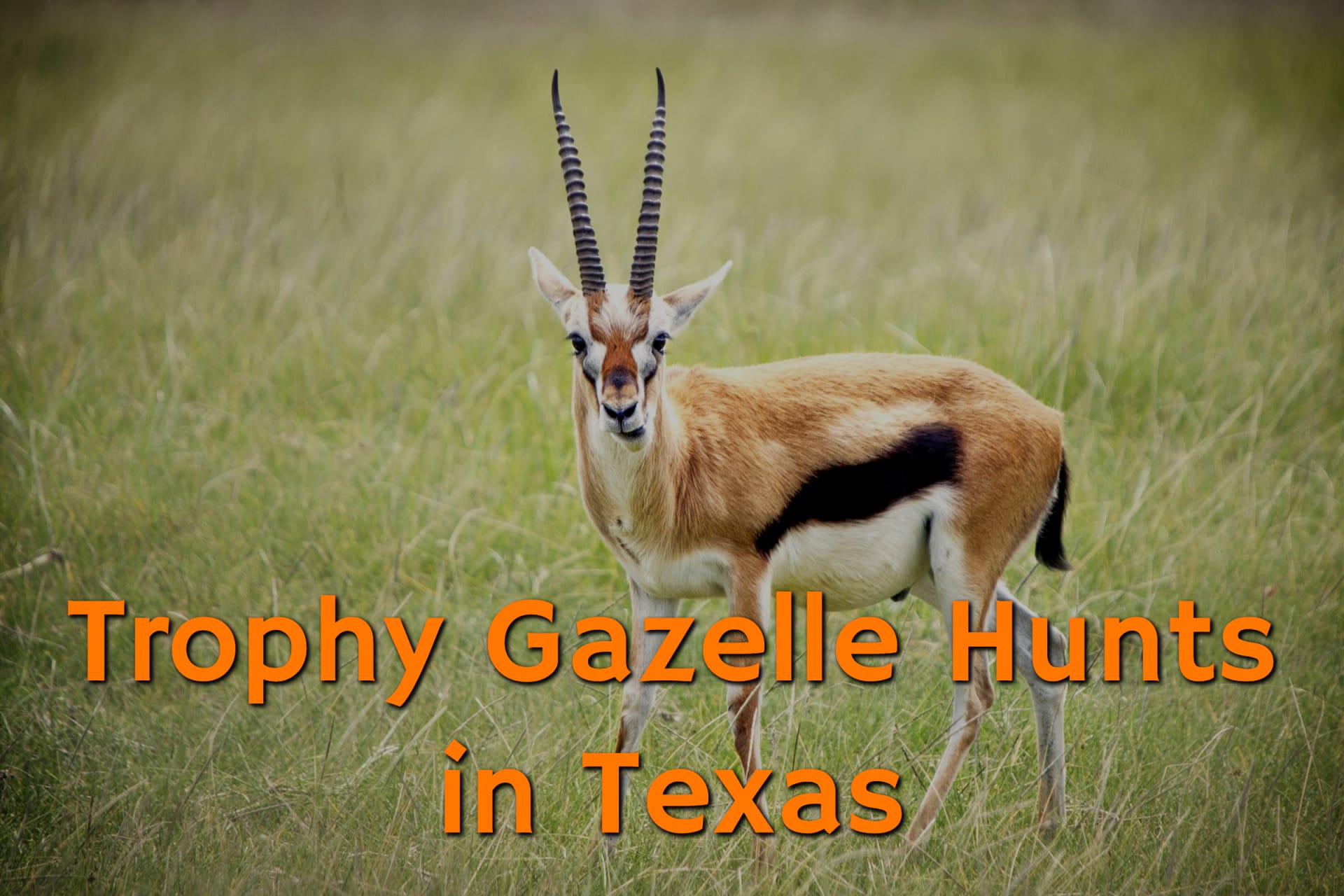 At Squaw Mountain Ranch we pride ourselves on providing a top-quality hunting experience with trophy animals any hunter would be proud to have on display in their trophy room. We offer elk, whitetail deer, red stag and a selection of exotic trophy animals as well. We are happy to be one of the hunting lodges offering Gazelle hunts in Texas.

Gazelle refers to a number of species of antelope. At first glance, gazelle are easily mistaken for deer due to the similarities in their body shape. Most species of gazelle can be found in Africa but there are a few species that can be found in other parts of the world, including parts of India, Asia, and even the United States, namely Texas. Overhunting and habitat loss, threaten many of these species to some degree. A number of them are listed as critically endangered.

Recent estimates suggest that the Dama gazelle has fewer than 500 individuals left in the wild. Unfortunately, little is being done in Africa to preserve the species. As with many other endangered species, as controversial and counterproductive as it may seem, controlled hunting plays an important role in conservation efforts.

Gazelle can vary in appearance based on which region they are from and which subspecies they belong to. Generally speaking, a gazelle has a long slender body with a sloping rump and skinny legs. They have two horns that sweep back off of the forehead and are generally straight or curved. Some gazelle have horns that twist or have an ‘s’ curve. Their horns are typically black or dark brown.

Male gazelle, called bucks, have horns measuring as much as 14 inches in length. Does often also have horns but theirs tend to be thinner and shorter than the males. Despite their strong resemblance to deer, gazelle are more closely related to sheep and goats. Like their more domestic cousins, gazelle keep their horns year-round, never shedding their horns like deer do each season. Gazelle also do not grow a winter coat so hunters plan their Gazelle hunt in Texas for whatever time of year fits their schedule.

Gazelle range in color from light tan to reddish-brown in color with a white belly and rump. Some gazelle have spots or stripes that differentiate them from other species. One of the most easily recognized species is the Thomson’s Gazelle, which is notable for the black stripe running down the length of its side from shoulder to thigh.

Gazelle most commonly live in deserts, grasslands, and savannas. They survive well in hot and arid climates. Most gazelle live in the Sahara desert and the Sahel region of Africa, where vegetation and water can be scarce for a good portion of the year. Some gazelle, like the Arabian Sand or reem, are able to shrink their heart and liver. A smaller heart and liver means their bodies need less oxygen, allowing them to breathe less.

Animals lose a lot of moisture when breathing so this reduced need for oxygen enables gazelle to conserve more water during the hottest times of the year. However, not all gazelle live in such harsh climates. The Cuvier’s Gazelle is native to the Atlas Mountains in Africa and enjoy a cooler environment. The Atlas Mountains are lusher than the desert and savannas that other gazelle are accustomed to and get significantly colder during the winter months, forcing the Cuvier’s gazelle to migrate to warmer regions.

Gazelle are herbivores and eat a diet consisting primarily of grasses, but they are known to also eat other plants, shoots, and herbs when they are available. They will also stand on their hind legs to reach leaves on trees when other forage is hard to find. They eat mostly in the morning and evening to avoid being out in the heat of the day, which helps them conserve water and ensures their food has a higher moisture content. Gazelles also have a second stomach which they use to store food to digest later, allowing them to go longer without eating.

While adult gazelle learn to survive on very little water, baby gazelle need a lot of water to survive. As a result, the mating season revolves around the rainy season. This can vary from region to region, but when raised in manged herds gazelle can produce offspring year-round. Gazelle will typically give birth twice a year, with pregnancies lasting about 6 months, give or take depending on the species.

Baby gazelle can weigh as little as 2 pounds and stay hidden in tall grass for the first several days of their life. After that, they are generally strong enough to keep up with the herd and will stay with their mother until they wean at 4 to 6 months of age. After weaning, fawns will remain with their mother in the nursery herd while calves will usually break away and join a bachelor herd. Gazelle reach sexual maturity in their first year of life and typically live 10 to 15 years.

Gazelle are very social animals and can gather in herds of 700 or more individuals. These herds are typically, but not always, separated by gender. However, if they are traveling in gendered herds, the nursery and bachelor herds will join up during the mating season.

There is no closed season on Gazelle hunts in Texas, making them a popular trophy animal among hunters. At Squaw Mountain Ranch you will find Dama Gazelles, Grants Gazelles, and Thomson’s Gazelles.

Gazelle are quick, sprinting at top speeds around 60 mph and comfortably maintain a speed of 30 mph over long distances. Gazelle also have keen senses and can often spot a predator well before you’re able to get close enough for a clean shot. While hunters at Squaw Mountain Ranch are welcome to use whatever method they choose, we recommend using a spot and stalk method on your Gazelle hunt in Texas. We are able to accommodate hunters of every experience level and with the help of our expert hunting guides, you’re sure to return home with a trophy you’ll be proud to put on display.

Call Squaw Mountain Ranch today at (830) 275-3277 to speak with one of our expert hunting guides to plan your Gazelle hunts in Texas.