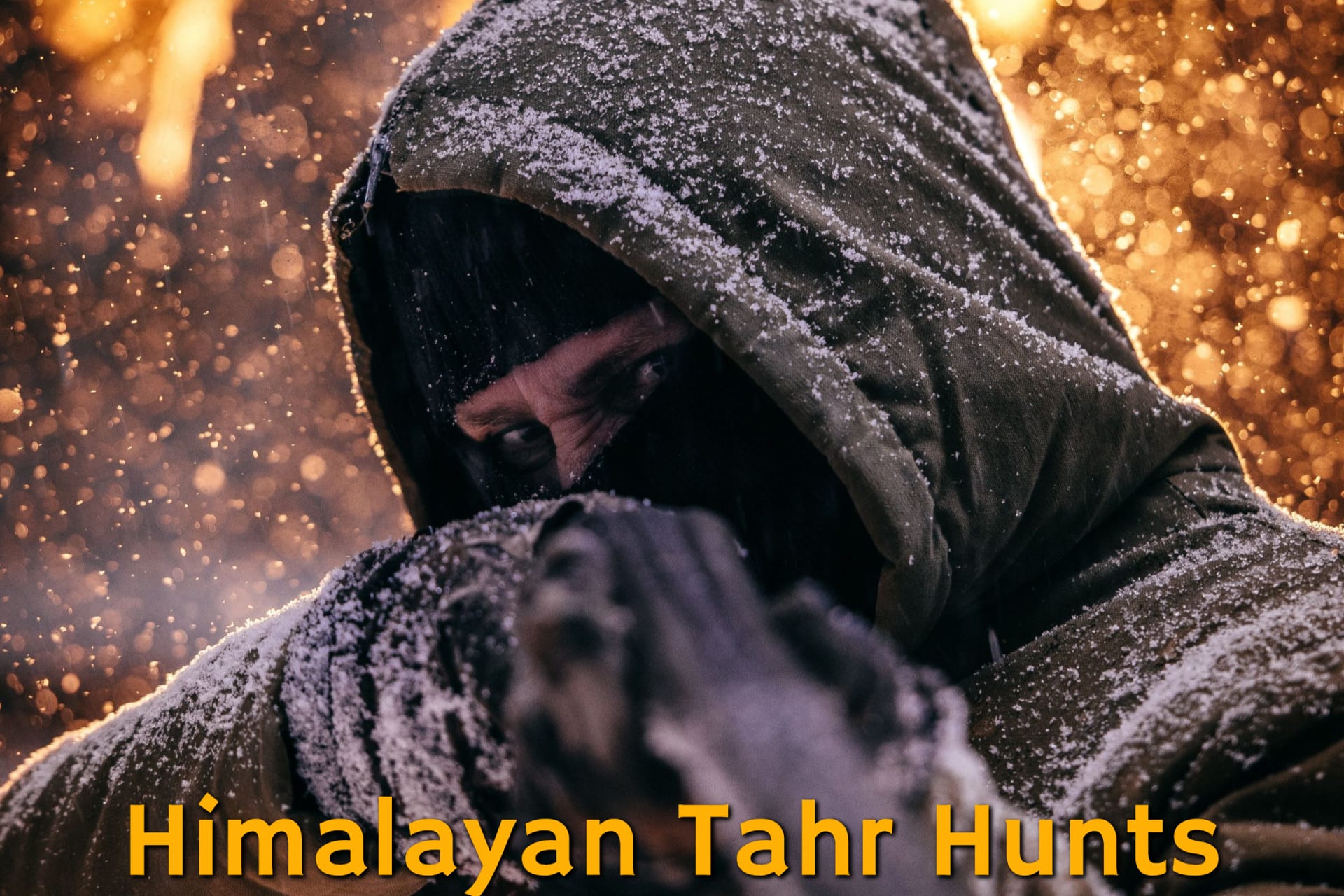 Here at Squaw Mountain Ranch we are pleased to offer more than 30 species of native and exotic big game. Our ranch, nestled in the oak canyons of picturesque Jacksboro, Texas is home to a variety of popular species such as red stag, elk, and whitetail deer. We are also proud to be one of the ranches offering trophy Himalayan Tahr hunts in Texas.

The Himalayan Tahr is a wild species of goat native to the Himalayan Mountains. They live in portions of the range in southern Tibet, northern India, and Nepal. Sadly, the number of wild Himalayan Tahrs is dropping and the animal is listed as near threatened due to habitat loss, competition for food with domestic cattle herds, and overhunting. Introductions of the breed to other countries like New Zealand, South Africa, Argentina, and the United States were an effort to preserve the species. However, despite its near threatened status in its native habitat, the Himalayan Tahr was denied protected status by the Animals Protection and Game Act in 1930 and is considered an invasive species.

The Himalayan Tahr is a large goat with a small head, large eyes, and small pointed ears. They have short horns that curve backward toward their neck. They are sexually dimorphic, meaning it is easy to tell the males and females apart based on appearance alone. The males are noticeably larger in size and weight and have larger horns than their female counterparts. Males can weigh up to 190 lbs, measure up to 3 ft tall at the shoulder, and nearly 5 ft in length. Their horns measure around 18 inches. Females typically weigh closer to 80 lbs and while usually shorter than the males, are roughly the same length.

The Himalayan Tahr is prized as a trophy animal due in large part to their impressive coat. They possess a long, thick, wooly coat that resembles a lion’s mane. Their reddish to dark brown coat is thicker and darker in winter to protect them from the harsh climate of their native mountain range. This coat thins but does not shed entirely in spring. As their coat thins it may lighten to a tan or buff color.

The Himalayan Tahr’s mane remains long throughout the year and is usually lighter in color than the rest of the coat, particularly during the winter months. In spring the mane may lighten to the same color as the rest of the coat. The mane is present in both male and female Himalayan Tahrs but is much more pronounced on males than on females. Hunters hoping to bag an optimal hide should keep the tahr’s seasonal shedding in mind when planning their Himalayan Tahr hunt in Texas.

The Himalayan Tahr, as its name suggests, is native to the Himalayas. It’s to living in rocky mountains, hills, and wooded mountain pastures. With their thick coats, they do well at high altitudes and low temperatures. In the warmer months, they migrate to regions as high as 16,400 ft above sea level to avoid the heat. During the harshest parts of the winter months, they will travel down the mountains to warmer climes where food and water are more plentiful.

The Himalayan Tahr is a herbivore and eats a wide variety of vegetation. They graze on primarily on grasses but will also eat shrubs and the leaves of trees when available. They tend to eat more woody plants than herbaceous varieties as their ruminant stomachs allow them to derive nutrients from plants otherwise overlooked by other grazing animals.

The Himalayan Tahr’s mating season begins in October and continues on into January. Herds usually consist of anywhere from 15 to 80 individuals. These herds are primarily adult females and their young, as well as one dominant male and a handful of non-dominant males. Males engage in ritual headbutting behaviors during the rut, which can be quite taxing on competing males. During this time, males competing for breeding rights in a herd will lose a significant amount of body fat, which may play a role in ensuring only genetically superior males survive the harsh winter months to breed again the following year. Estrous females also seem to prefer males with a lighter colored mane. If you plan to take advantage of the rut and see some impressive headbutting, be sure to plan your Himalayan Tahr hunt in Texas for some time in the fall.

Bachelor herds will follow the larger herds and breed opportunistically with estrous females while the dominant male is busy headbutting males who are competing for breeding rights. Females will remain pregnant for approximately 7 months, usually giving birth to only one kid per mating season. Tahr females do occasionally produce twins, but this is rare. Kids will nurse for up to 6 months and reach sexual maturity at approximately 2 – 3 years old. They typically live up to 10 – 12 years in the wild but can survive live as long as 22 years in captivity.

The Himalayan Tahr, while listed as near threatened in its native habitat, is considered an invasive species in the United States. For this reason, there are no seasonal restrictions on Himalayan Tahr hunts in Texas.

The Himalayan Tahr is a very challenging and rewarding animal to hunt. They have two ‘toes’ that end in hooves that are keratinous and hard along the edge but have a rubber-like core. This combination allows them to traverse terrain otherwise inaccessible to other species because they are able to grip both rough and smooth surfaces or wedge their hooves into crevices as they climb. Tahr may not be particularly fast but they can traverse difficult terrain a lot faster than most species in their region. Thought the terrain here at Squaw Mountain Ranch is not as treacherous as the Himalayas, our oak canyons and rocky hills provide plenty of places for our Himalayan Tahr to hide, ensuring our hunters a challenging hunt.

Call Squaw Mountain Ranch today at (830) 275-3277 to speak with one of our expert hunting guides to plan your next Himalayan Tahr hunts in Texas.